The Grenoble-Alpes-Métropole Region consists of 49 municipalities, among them the capital Grenoble. The metropolitan area is home to ca. 500,000 inhabitants, out of which more than 1/3 live in Grenoble. The Grenoble metropolitan region is a major winter tourism and research hub, and often nicknamed as the “Capital of the Alps”. The city of Grenoble houses some of the country’s best universities and was ranked repeatedly as the best French city for students. Grenoble is considered to be one of the climate action frontrunners in France, and was also the first French metropolis to have a Green politician, Eric Piolle, as mayor.

Ambition of the Plan

As 42% of the total energy costs are related to buildings in the Grenoble metropolitan area, retrofitting the buildings sector is considered as a major priority in the roadmap.

Grenoble-Alpes Métropole encourages not only its residents, but also its tertiary sector to commit to substantial thermal renovation. In order to mobilise action, the city of Grenoble for example stipulates in its Local Urban Plan that the performance of new buildings must be 20% higher than the current thermal regulation requirements, exemplifying how local building codes can drive high energy efficiency ambition.

Most of the Grenoble’s metropolitan region’s houses have been built between 1945 and 1970, including offices, universities and hospitals, and are therefore not very energy efficient. They will require major and deep retrofitting, for which Grenoble will have to mobilise substantial upfront investment volumes

With the conversion to renewable energybased electricity and heating systems, coal will be banned completely by the Grenoble metropolitan region, while also fuel oil boilers will be progressively phased out. Furthermore, Grenoble will use a mix of local renewable energy sources on its pathway towards 100% renewable energy, focusing especially on decarbonising its heating sector.

Grenoble’s Heating network is already the 2nd largest in France. Nevertheless, the metropolitan area will invest in 8 new local heating networks by 2030, running on renewables, while the main heating network will be further densified through mandatory connection of new buildings. In order to boost solar thermal energy, feasibility studies and investments in public solar thermal systems will be considerably supported, in particular via the Local Heating Fund. The use of geothermal energy will be boosted by the creation of compact geothermal networks, including a shared outlet network that will power 300,000 m2 of buildings in the metropolitan area. Finally, excess heat produced on industrial sites will be recovered and injected into the heating network. This will be beneficial for the metropolitan area’s amount waste policy, as it will lead to less waste being incinerated to generate heat.

In order to implement its energy roadmap in conjunction with all relevant local stakeholders, the Grenoble metropolitan region has established a public energy committee. This new body includes stakeholders such as network operators, regulated tariff energy suppliers and other players from the energy production, distribution and demand management side. The public energy committee will be ultimately responsible for the swift and effective delivery of the roadmap’s ambitious targets, in particular in the field of energy. The new body also represents a major opportunity for Grenoble-Alpes-Métropole to strengthen its partnerships with all relevant energy stakeholders on its territory.

During the development of its roadmap, the Grenoble metropolitan area launched a three-stage citizen participation process within two years, consisting of several rounds of discussion so that citizens and local stakeholders could gain ownership of the plan. As a result, a wide variety of stakeholders could provide their inputs in the drafting of the roadmap – e.g. all 49 local authorities in the metropolitan region, the citizens’ panel energy users committee, the local urban development agency, energy authorities, researchers, the air energy climate plan committee, distribution network operators as well as the local energy and the climate agency.

Throughout the process, questions regarding the transformation of the energy landscape, including the change of energy consumption patterns, innovations, the production of renewables, and, most importantly, regarding the share of responsibility were addressed. All the stakeholders could contribute so that their inputs and data modelling allowed for the scenario development. In addition, the calculation of potential environmental and economic advantages and risks resulting from initiatives, such as the replacement of boilers, the insulation of buildings etc. resulted in a number of approved initiatives, which were ultimately included in the roadmap’s scenario. This holistic approach was also key in Grenoble-Alpes-Métropole decision to establish the public energy committee in order to oversee the successful implementation of the roadmap, and represents an inclusive and effective decision-making process.

Grenoble-Alpes-Métropole citizen engagement charter, the “charte d´engagement”, also played a critical role in the citizen participation process of its roadmap. Through the charter, each and every citizen could submit their ideas and activities for contributing to the achievement of the roadmap. Thereby, the citizen engagement charter is not only a truly inclusive process, but also fosters solidarity among the people of Grenoble-Alpes-Métropole and allows for sharing responsibilities among all the local players involved. 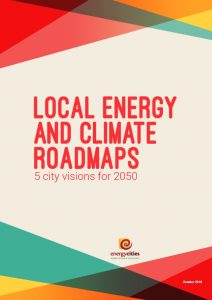