Let us introduce you to the Energy Cities Impact Report for 2019! It was a great year for our organisation: our members stepped to the fore to « Show Share and Shake » ideas, projects and plans about how to build a better city for people.

This report is not about everything we have done, it is about the impact we had on the people, places and policies that determine how we live.

From our manifesto to the EU Green Deal

Together, because we must always act together, all levels of government signed the Partnership Declaration on Collaborative Climate Action.

2020 opens a new era for cities and our urgent response to climate change. It is also the end of a previous era. Declarations of climate action have been written and signed, climate emergencies have been issued, people have taken to the streets like never before – calling for a change in the way we live, in the places we live and the rules under which we live. 2020 is the beginning of a new era in which we deliver on those demands with greater urgency than ever before.

2020 is also the 30th anniversary of Energy Cities. We were founded in the run-up to the Rio Summit and just after the fall of the Berlin Wall. Astonishing change has occurred in the last three decades as the network has grown to include hundreds of cities in 30 countries.

30 years is an important milestone and the halfway point to net zero by 2050. The changes we will see in the next 30 years should be even more astonishing. 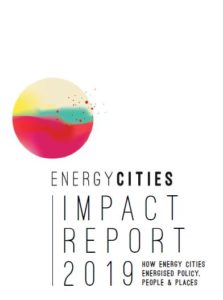 2019 began with the launch of the Energy Cities manifesto ‘Claiminga Crisis’ and it ended with the launch of the European Green Deal. Those two events are related. In between people from every level of government and from around the world gathered in Heidelberg for the International Conference on Climate Action. Together, because we must always act together, all levels of government signed the Partnership Declaration on Collaborative Climate Action.