Greek cities tested the Living Streets model and you can too!

Last August and September, the cities of Elliniko – Argyroupoli and Corinth tested the living streets model and gave their inhabitants the opportunity to turn their streets into the places of their dreams! The experiments were successful, each city made the best out of the opportunity offered by our EUKI-funded project, with the support of our partner Sustainable City Greece.

Elliniko – Argyroupoli: children at the centre

In Elliniko – Argyroupoli (South of Athens, Attica region) activities took place in theneighborhood of Sourmena every day for 10 days (September 12th to September 22nd), at a kiosk on Ethnikis Antistaseos square. In addition, ChrysanthouTrapezountos street and the surrounding area were closed to traffic.

Elliniko-Argyroupoli’s Living Street gave special focus to their young inhabitants: with traditional street games, creative activities, fairy-tales readings, concerts, and educational workshops on subjects like recycling, nature preservation and stray animal care, kids were invited to experience their neighborhood differently. They met the local voluntary forest protection team, firefighters and the first aid team. Thanks to the project, they could put the city in a new, environmentally conscious and human-centered light!

According to the MayorGiannis Konstantatos, “We are the generation that remembers a different city of Athens, where we played outside without the fear of cars…And that is exactly what we want to experience again”. The Municipality will look into the possibility of replicating the experiment in other parts of the city.

Corinth: towards a pedestrian city centre

In Corinth, cars were removed, and streets were turned into playgrounds with giant chess tournaments, open-air cinemas, cycling and running marathons and other activities. The main areas interested by the experiment were all in the city centre: Ethnikis Antistaseos Street, Kolokotroni and Ermou Streets, Floisvos Square and Adeimandou Street. The Municipality closed the traffic for 20 days, to test their idea of creating a pedestrian city center with an “open-air mall” in 2022.

Activities lasted 3 weeks through the months of August and September. The first week of the project started with the inauguration of the life-size chess boards on Ethnikis Antistaseos Street, while in the second week Floisvos Square hosted a program of events centered around health crisis management, sustainable development, climate change, agricultural waste management, energy saving and sustainable urban design, with speeches, workshops, and screenings. On the third week, the city organised a 10km cycling tour and a run starting in Kalamia Square. The race wanted to showcase the wetland of the Ancient Port of Lechaio, and to promote issues of urban planning, mobility and healthy lifestyle during and after the pandemic. It saw the participation of around 300 people! Corinth’s living streets concluded with a ceremony on Sina Street (a video is available here), where a graffiti wall made by local artists was revealed.

According to Corinth Deputy Mayor of Research and Development, Giannis Gezerlis. “By 2050, 2/3 of the world’s population will live in urban areas. Road traffic affects the quality of life and the quality of the environment…We choose another approach where citizens work together to acess the streets without being dependent on cars”.

Over the year, Energy Cities supported numerous cities across Europe to develop Living Streets. We are organising a workshop in Faro (Portugal) where municipalities will be able to o learn from their peer’s experience and discover new tools to engage citizens in climate actions! Find out more here 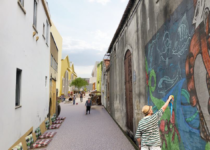 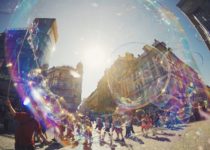 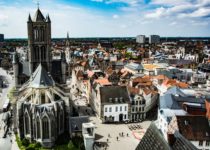 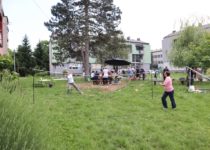