The municipality of Växjö, in Sweden, set itself a challenge very early on: to become a fossil fuel free city. This objective was the result of a long-term process: it began when a few measures, which through their success left a deep impression on the elected representatives, thrust the city down an energy and then environmental transitionpath. The process works through close cooperation between the political, economic, institutional and community stakeholders.

External events, such as the eutrophication of the lakes in the 1960s and the oil crises in the 1970s, aroused the interest of the elected representatives and set the whole process in motion. For local stakeholders, restoring water quality was essential to improve the quality of life in the city and once again make the lakes an attractive place for people. The municipal energy company suggested biomass -a local, abundant source of energy stimulating forestry-as an alternative to oil to avoid exposure to the fluctuations of the oil market. The elected representatives noticed that environmental and energy measures had beneficial impacts on local development. To encourage this trend and assess its potential, the city decided to work with the biggest environmental NGO in Sweden. The NGO implemented measures that created a positive spirit of dialogue between elected representatives and municipal staff, resulting in fruitful discussions between all the economic, political, socio-cultural and community players. In1996, these discussions led the city council to take the unanimous decision to make Växjö a fossil fuel free city.

This political decision was followed by two periods. In the 1996-2006 period, the city council had no clear plan of action on how to attain its objective. In the same period, the Swedish government launched a local investment fund which proved of pivotal importance to Växjö, as the municipality had to bring together all the local stakeholders to prepare projects and define responsibilities before submitting its application for funding. This work was the starting point of the Local Agenda 21. But in 2006, the municipality realised that attaining its objective would require a coherent, long-term action plan. The second period started in 2007, when the city council set up the local climatecommission composed of major public and private stakeholdersto work on this action plan. The commission identified priority actions and the players responsible for them. The city council then set up an annual monitoring plan to assess progress and take corrective measures if necessary. In 2010, Växjö officially announced its aim to become “fossil fuel free” by 2030.

By 2012, the city had reduced itsCO2emissions by 41% compared to 1993. Biomass covers 88% of the district heating supply and the share of oil in the energy mix has dropped from 100 to 6% in25years. 58% of the energy supply in Växjö is from renewable sources, i.e. 10 points above national average. Between 1993 and 2010, the economic growth rate rose 73%. The city is an acknowledged pioneer of ecological transition and its “green” profile has attracted between 150 and 200 delegations from all over the world. 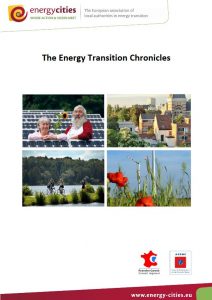