The City of Tampere has been actively supporting condominiums (limited liability housing companies) with “Energy Expert” training courses since 2000. Between 2015 and 2017, this activity was supported by the Low Carbon Housing Tampere Plus (TARMO+) project. The aim of this project has been to make housing companies in this region think about how to be energy efficient in line with the 2025 city strategy. This project was based on a true multi-stakeholder approach, focused on strengthening cooperation among all stakeholders in the territory. To date 250 housing cooperatives and 50 energy services companies have got involved in the project and nearly 400 free-willing residents from different housing companies have been trained.

In this case study, you will learn about the Energy Expert trainings developed in the Tampere Region that can be used as an inspirational example by other cities that want to launch or further low-energy and carbon solutions to make housing more affordable for all residents.

TARMO+ project was recognised as a European Good Practice for the work done in the field of low carbon housing and received the “URBACT Good Practice” label, and there were also 15 good practice cases documented on tarmoproject.fit. 100% of stakeholders declared TARMO+ actions beneficial. According to surveys, all of the housing companies have benefited from these courses. The average saving in electricity has been 10% and in some cases even 60%. The water consumption has decreased on average 20% and in some housing companies even 40%, and district heating around 17%. Living comfort standards and social aspects have improved in condominiums managed by housing companies who have Energy Experts as they actively interact with residents thanks to the new communication tools that have been represented in the courses. At the moment about 200 residents are really active in their housing companies and that affects about 20 000 residents in the city (almost 10%). These trainings also built stronger links between the community where some of the people are elderly and may feel lonely in their lives. They had a positive social impact, as they have been a way to meet new people.

Read the full story attached to learn more about the whole process, its governance and implementation. 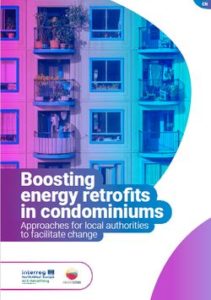 Through this guide, partners from the EU-funded ACE Retrofitting project share their learnings on how to act as facilitators between co-owners in condominiums and building experts when it comes to energy retrofits.