Locally owned renewables were at the centre of many debates during our annual forum. Discover the main takeaways!

Collective ambition and local partnerships were at the heart of Energy Cities Forum at the end of April. As expected, community energy made a big part of the conversations during policy dialogues, workshops, study visits and networking moments. Let’s look back at those enriching days to highlight some of the key takeaways on locally owned renewable energy!

Takeaway 1: Persist no matter what, you will always learn useful lessons on the way

If we were to choose two words to describe the study visit organised by Energy Cities in Leuven with the help of RESCoop.eu and the municipality on 20th May, we would say “persistence” and “trial & error”. Our guides Dirk Vansintjan (RESCoop.eu) and Stijn De Jonge (KU Leuven) gave us a tour of the pioneering Dijlemolens complex. An industrial mill until 1979, it was refurbished to host apartments in 1985. Already at that time, the local community was concerned with sustainability and renewables, and wanted to experiment innovative energy systems within the building. The group of enthusiasts installed solar boilers, a water turbine, and a heat pump. The system did not function properly due to technical issues so in the end a gas boiler was deemed a more cost-effective solution. Nonetheless, the local citizens group could learn a lot from this first experience and did not give up, trying to find greener alternatives to power the building in the decades that followed.

It was inspiring to listen to our guides’ remembering the mistakes, the roadblocks and how they went forward and came up with new ideas each time. Thanks to the experience, they learned enough to successfully start other local renewables projects in the city and in the region. Today, the building is still used by the municipality as a testbed for renewable solutions: a new heating system will use the river as an energy source, creating an open aqua thermal system with a heat exchanger and a new heat pump. The system will be completed with the installation of solar PV panels, to reduce the residents’ electricity bills.

Takeaway 2: Community-owned renewables are key to address energy poverty but we need to tackle lack of data, financing, and capacity to involve vulnerable groups in such projects

The workshop “Co-designing energy services with and for vulnerable communities” addressed three key issues related to energy poverty: data and digital tools, business models and engagement strategies. An expert from the City of Barcelona presented their innovative approach to data. Data being considered as “the new soil”, the city focuses its generation and use on public knowledge, open-source projects and collaborations between many stakeholders: public sector, corporations, tech-based companies, and academia, with citizens’ needs at the centre. Barcelona is looking to increase energy production in public spaces and use it to help energy poor communities. However, they are often confronted with the lack of data for such projects. The workshop participants were asked if they would be happy to freely donate data for the public good, or if they’d rather have the private sector handle the data and receive a discount at the end of the month…no consensus was found!

The discussion on business models revolved around how to support local initiatives tackling energy poverty. Financing never comes easily for such projects, and representatives of the Energie Solidaire project (France) and energy cooperative Ecopower (Belgium) told participants about their experience, showing how different solutions are available, from membership fees to cross-funding and donations-based systems.

South East London Energy Community and the Croatian Green Energy Community have a lot of experience in engaging vulnerable households in community energy: energy cafes, free energy consults, campaigns are only some of the tools they mentioned during the session. Nevertheless, they have to invest a lot of resources to reach those communities and are still confronted with occasional lack of trust in their organisations and projects.

“If your energy revolution leaves people behind, we want no part in it”

The workshop was the perfect occasion to launch Energy Cities & REScoop.eu’s Community Energy Communications Guide, a publication that will support local actors in the development of successful engagement strategies and campaigns for their renewable energy projects

Takeaway 3: Now more than ever, locally owned renewable energy is a vehicle of peace and security

What post-2020 trends and strategies are cities and local communities setting to inaugurate a new era of shared ownership and valorisation of energy systems?  How can energy security go hand in hand with citizen engagement and community power? These were the key questions that were addressed during the political debate “The geostrategics of energy: what new trends in Europe”.

Dan Lert, Deputy Mayor of Paris shared current priorities for his city: reducing energy consumption and increasing the share of renewables in the grid. According to the city, member of the Energy Cities Board of Directors, sufficiency policies are fundamental to ensure cities can be independent in their energy choices but they are still difficult to communicate to citizens. Becoming energy independent became even more important as the war in Ukraine has brought energy at the centre of security debates. Mr Lert was echoed by Deputy Mayor of Budapest Kata Tüttő, whose city is currently experiencing energy supply insecurity.

“As cities, we are at the forefront to deal with citizens’ issues. But somehow our voices get lost between the regional and national levels.”

The Croatian city of Krizevci aims at becoming energy independent by 2030. Mayor Mario Rajn explained how they are going to make it and highlighted how important city-citizens energy partnerships are. This applies especially to Eastern Europe, where national governments provide little incentives and where financial instruments are not suited for this type of projects. Indeed, European Commission representative Hans van Steen later underlined how important cities have become in the last 10 years to reach the EU’s carbon neutrality objectives: local leaders are way more ambitious than their national counterparts. Solutions are already available, but now more than ever, we need to act quicker. 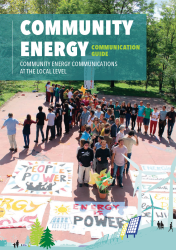 This Communication Guide complements the publication “Community Energy – A practical guide to reclaiming power”. The Community Energy guide, published in 2019 by Friends of […]