MOLOC, “Morphologies Low Carbon”, is a European project co-funded by the Interreg Europe Programme. It is led by the City of Lille and includes the cities of Turin, Hamburg, Suceava, the Katowice Mining Research Centre and Energy Cities. The aim of the project is to define and test innovative solutions to build a low carbon city, together.

What is a low-carbon city? This was the first question the six partners asked themselves when the project started in 2017. After three years of joint work thanks to the support of the Interreg Europe programme, answers have been found – this is the purpose of this document – and urban solutions will be tested in the coming months during the second major stage of the project.

For Katowice, the fight against air pollution is the number one issue. The coal industry still employs 100,000 people in Silesia. The systematic use of individual coal heating creates heavy fine-particle pollution in the cities of the region.

The town of Suceava, on the other hand, is facing major problems of traffic congestion. The City is not large enough to develop heavy public transport, but the central axes, especially the one crossing the Suceava River, are overcrowded. Suceava, therefore, decided to develop a fleet of buses, municipal vehicles and electric bicycles.

In Hamburg, the “Schnackenburgsallee” industrial and commercial zone in the Altona district was chosen. This area has been neglected by recent sustainable urban development plans. The idea is therefore to engage the heads of companies in this area for energy efficiency contracts.

For Lille and Turin, the objectives are quite similar. The two cities aim to contribute to the formation of a sustainable urban development strategy, based on four pillars: the construction of a common tool for sharing low-carbon data on the territory, the selection of indicators, the development of tools for monitoring delivered operations and the use of eco-materials. 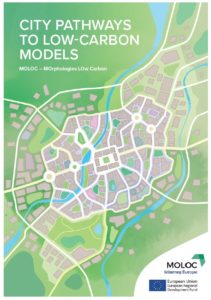 This document synthesizes the major processes and events of the urban pathways to low-carbon models, each city will be highlighted individually for its unique context. Some basic information will help to paint the picture of each city along with their MOLOC actions and stakeholders.