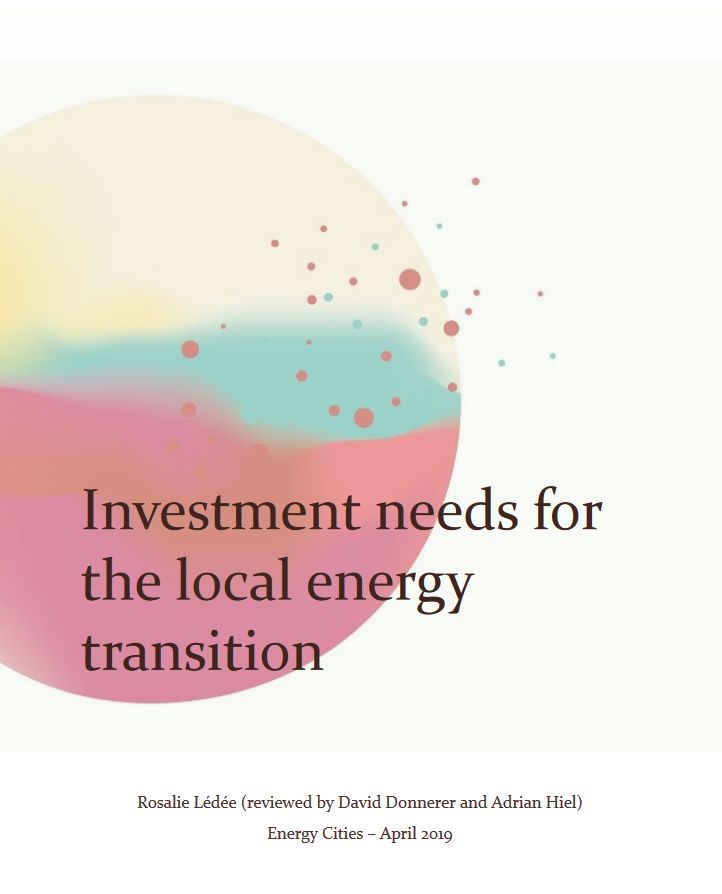 Cities’ actions for the energy transition are essential to achieve the Paris Agreement’s objectivesby 2050.Responsible for 80% of energy use and CO²emissions, local governments understand that theyneed to invest for a sustainable futureon a liveable and healthy planet.

The European Commission has estimated that it would require EUR 175 to 290 billion per year more to turn the EU into a net-zero greenhouse gas economy in 2050. For example, the EU would need to invest an estimated EUR 8.5 trillion for implementing sustainable heating systems for the period 2012-2050. To decarbonise the building stock by 2050, a staggering EUR 4.25 trillion more than normal investments would be necessary.

At the local level, such estimations are more difficult to establish. This publication is therefore relying on five examplesof European cities,that are frontrunners in the local energy transition and which have put a number on their investment needs by 2050 in order to succeed in their transition. Through our case studies of the cities Ghent (Belgium), Frederikshavn (Denmark), Bordeaux-Métropole (France), Sevilla (Spain) and Tallinn (Estonia), all signatories of the Covenant of Mayors-Europe initiative, we have identified the local investment needs for the energy transition in different geographical, socio-economic and sectorial circumstances. Moreover, this selection of a wide range of citiesof different sizes, territorial characteristics and resources will enable national governments to make the right fundingand investment choices for the future, thereby allowing local authorities to thrive and play their key role to the fullest in supporting the EU and its Member States to achieve the Paris Agreement’s objectives.

The city of Ghent in Belgium is implementing inclusive energy policies to allow everyone to have access to cleaner energy and innovative technologies. Its flagship project “Neighbourhood Power” (Buurzame Strom) supports the installation of solar panels in a low-income district. The participation of citizens is a key priority in their strategy, as they are included in the city’s projects and have also the opportunityto express what kind of energy transition they wantduring the so-called Climate Arena,a citizen forum put in place 2by Ghent. In order todeliver its energy transition to a carbon neutral city by 2050, the investment needs are estimated at EUR 750 million for Ghent.

The city of Frederikshavn in Denmark has the ambitious objective to achieve 100% of renewable energy by 2030. Frederikshavn would need EUR 1 billion to achieve this target. The main challenge for Frederikshavn is to encourage all citizens and private actors tojoin in thetransition. The city has opted to lead by example through ambitious building retrofit and sustainable mobility actions. Furthermore, this Danish city seeks toattract funds fromsustainable companies and renewable energy producers, by providing a favourable investment environment, while at the same time proposing policies to incentivize more citizens to invest in the transition as well.

In France, the city of Bordeaux-Métropole is paving the way for the energy transition by seeking to become an energy-plus metropole by 2050 through, in particular, the collaboration between its urban and rural areas. In the period 2017-2022, investments are planned worth EUR 535 million, which if maintained, would result in investment needs of EUR 2.7 billionby 2050. The city focuses on acting as coordinator and facilitator by supporting successful projects, such as the project of its flagship industrial cluster, the ecoparc of Blanquefort. There, Bordeaux-Métropole mobilises sustainable companies to follow the principle of industrial ecology, and share resources and expenses.

In Southern Europe, the Spanish city of Sevilla is also leading an ambitious energy transition to become a role model for sustainable mobility. The city has planned to invest EUR 264 million for the period 2012-2020, and up to EUR 1 billion by 2050. Sevilla is focusing in particular on sustainable mobility in its energy transition, by establishing notably a large cycling network and pedestrian zones to reduce air pollution and incentivize citizens to move away from using their cars to commute.

Finally, the example of the Estonian capital of Tallinn highlights how the heating and cooling sector also plays a critical role in the long-term investments for the energy transition. Tallinn is currently mobilizing some EUR 300 million in energy and climate actions, and is aspiring to become one of the first low-carbon cities in Eastern Europe with its ambitions on smart buildings and smart mobility. The city has estimated its investment needs at EUR 900 million by 2050.