The city of Mouscron has given us a broad outline of its new projects under way, including one involving collective self-consumption for an entire neighbourhood.

Photovoltaic (PV) energy remains a major concern for this Belgian municipality. The Mouscron energy cooperative COOPEM is part of the COLECO project.

Launched last year, COLECO seeks to create a local momentum for collective self-consumption in Walloon Picardy with an ambitious objective: to create 7 mini-grids in business parks by 2021 and a hundred or so local renewable energy communities in Walloon Picardy by 2025. This region, which includes 23 municipalities out of which Mouscron, should therefore see several of these communities emerge in each of the participating municipalities.

As part of the experiment, the city of Mouscron and its citizen energy cooperative COOPEM aim to install high-capacity PV panels on large roof structures. It’s the the Saint-Exupéry school in Mouscron that has been chosen as a pilot site. This large school building has a wide roof area capable of accommodating 100 kWp of PV panels. The panels will be paid for by the citizen cooperative. The school, as the energy producer, will be the primary beneficiary of the Renewable Energy Community (REC) thus created. But as a school, it also uses little energy. During the summer, at the weekends and on public holidays, when the school does not use the energy it produces, part of it will be sold and injected into the grid – at a very low price, though. In this neighbourhood, 200 houses are connected to the same low-voltage sub-station as the school and could therefore join the energy community.

In Mouscron in general and especially in this area, houses are terraced houses with narrow 5m / 5.5m façades and small roof surfaces not suitable for installing PV panels. This is why PV installations are a rare occurrence in Mouscron. Currently, only 3 of the 200 households connected to the same low-voltage sub-station as the school have their own PV installation.

To ensure a better balance between energy consumption and production, a new collective self-consumption management software tool will be made available to connected households. The financial savings on the electricity bill are expected to be of 10 to 15%. These self-consumers will receive two invoices: one from the conventional company supplying electricity to the Mouscron area (as the system requires maintaining the conventional energy supply), and one from the energy community.

The COLECO project is led by IDETA (the local development agency) in collaboration with the inter-municipal undertaking IEG, the municipalities of the Walloon Picardy area, COOPEM and HAULOGY, a company specialising in the development of software for energy stakeholders.

The energy cooperative, a retrofitting facilitator

The COOPEM  energy cooperative is also contributing to the BE REEL project which was launched and led by the city of Mouscron. The objective, in parallel to the deployment of photovoltaics, is to bring entrepreneurs and tradesmen from around Mouscron together to create a cluster of businesses covering all the trades (heating, insulation, roofing, etc.) and help people retrofit their homes. Many residential buildings in Mouscron are in need of renovation. Many of them were built in the 1970s, or even before. The cooperative aims to facilitate retrofitting by offering its members a one-stop-shop, where they’d be their single point of contact.

“We want to be able to tell people: join COOPEM and we will help you with all the administrative stuff” says Emmanuel Fontaine, the cooperative administrator. “Because being eligible for a subsidy is fine, but there is a lot of paperwork involved, explanations to be given, etc. All this will be handled by the cooperative. It is still very new, we’ve just had a meeting with all the building companies and entrepreneurs working in the Mouscron area to get their feeling about the project. From many of them, the feedback is extremely positive”.

Mouscron is part of the Walloon region but is located very close to the border with Flanders and with France. This means that the municipality has contacts with its close-by Flemish and French counterparts. This geographical situation has given rise to an Interreg project called TransEnergy. As part of this project, the city is working with the association Virage Energie on the development of soft mobility routes in the cross-border region. The objective is to propose three routes – one for cycling, one for walking and one for e-scooters –to discover the region and its renewable energy sites (passive houses, industrial sites using PV, CHP energy or heat pumps) along the way.

Click here to read or listen to the interview we did with Emmanuel Fontaine who is both the City of Mouscron’s energy adviser and one of the cooperative’s trustees. 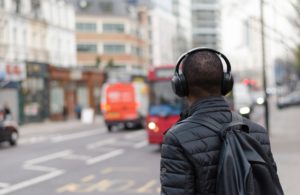 Henry Be on Unsplash 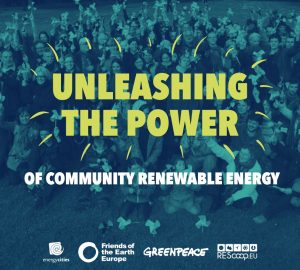 Community energy production in Europe has huge potential. A recent study found that half of EU citizens – including local communities, schools and hospitals – could be producing their own renewable electricity by 2050, meeting 45% of their energy demand.1 Now, building on new EU community and citizen energy rights, the potential must be fully unleashed, to put Europe on the path to the needed energy transformation.